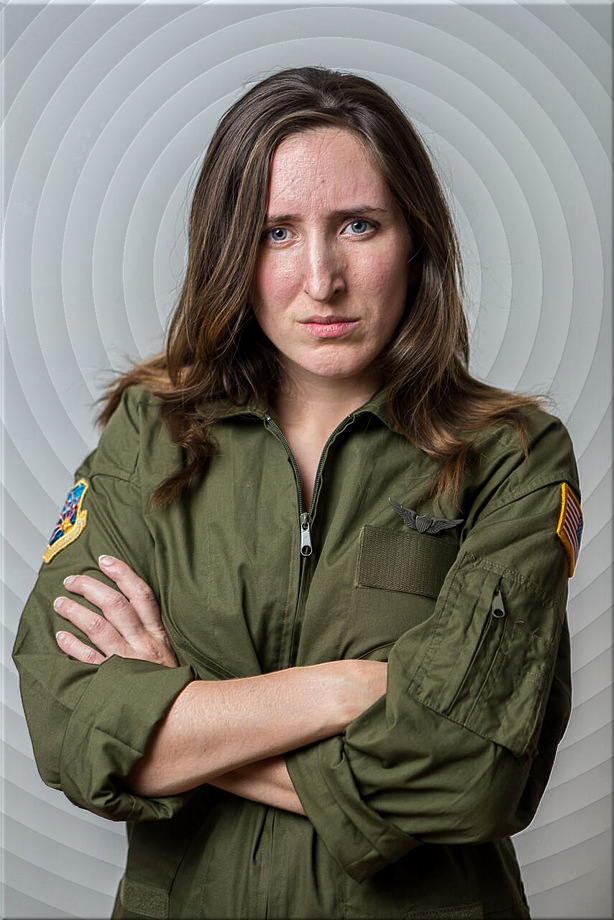 “Compelling theatre, close to home.” That’s the mandate of Bear & Co., a professional indie theatre collective and a resident company at The Gladstone Theatre. Barely five and a half years old, Bear is about to open its 18th play for a limited run at The Gladstone from January 17-27.

Bear’s production of playwright George Brant’s Grounded is just the latest in a string of Ottawa premieres by the company. This award-winning one-woman show became an Off-Broadway hit starring A-lister Anne Hathaway as an elite air force fighter pilot, proficient at dropping bombs over Afghanistan and Iraq, who gets grounded once she becomes pregnant, only to be reassigned to Nevada’s ‘chair force’ to operate drones continents away from her targets.

A trio of equally formidable women is behind Bear & Co.’s production of Grounded.
Alexis M. Scott dons the flight suit to white-knuckle the audience through the emotional power trip of feminism going head to head with female biology. Director/actor/producer Eleanor Crowder is one-half of Bear & Co., while Hintonburg’s own Rachel Eugster is the other half of its genius. (Eugster is also Bear’s music director, actor, writer of an award-winning children’s book, community activist and formerly a long-time soloist at Parkdale United Church.)

After seeing Grounded in New York, Crowder was so taken by its powerful script that she had to produce it. Crowder, who directs Scott in a role whose hard edges turn anything but mushy, had this to say: “A solo show is a marathon, a triumphant display of talent and sweat. This text is exactly that. A sweep of action and insight that asks the performer to pour every ounce of strength into her work. Alexis is the actor for this role. She is utterly compelling.”

Scott, a 2015 Prix Rideau Award nominee for her work as an emerging artist and a graduate of the Ottawa Theatre School, currently works out of Toronto. She has acted in past Bear productions, including Shakespeare’s Macbeth, The Tempest, and The Comedy of Errors.
Bear performs indoors and out, with casts large and small, offering works from the Elizabethan era to the present day.

Eugster says they typically put on three shows per year, starting with “something really daring” (like Grounded), followed by summer Shakespeare in the Park (Romeo and Juliet, 2017; Macbeth, 2016), followed by a fall musical revue (No Way To Say Goodbye: Songs of Leonard Cohen in 2017; and Jacques Brel Is Alive and Well and Living in Paris in 2016).

A small company that punches way more than its own weight, Bear chooses works that intrigue and please audiences while delivering peak power from its artists.
Catch Grounded before it takes off.

Tickets: at The Gladstone thegladstone.ca/grounded/