July 26, 2018: Nature All Around Us;
Lots of Young Birds and the End of Frog Breeding Season.

When various gull species meet in winter at one of our Twin Cities’ dumps, a favourite song they sing to brave the cold is ‘Fresh Garbage’ by Spirit.

Last time I continued telling you about frogs and birds and how they would be doing in July. You probably noticed many young birds then.

In Ottawa, the most common birds are The Big Three Introduced Species: Rock Pigeons, European Starlings, and House Sparrows. They were introduced from the Old World decades ago and successfully muscled their way into our cities.

Rock Pigeons are pests, pooping and nesting on balconies. European Starlings kick native birds out of their nest holes, while House Sparrows build messy nests on buildings yet provide us nice music.

Common native birds in the city include Song Sparrows, on which Ph.D. thesis have been written on their complex songs. Mourning Doves are smaller and more streamlined than Rock Pigeons and are hunted out in the country.

Those large white birds flying over us and picking up food at fast-food joints are gulls, mostly Ring-billed Gulls. They nest colonially on rocky islets in the Ottawa River between our Twin Cities. In autumn, they are joined by several other gull species and are best seen on that river and on the two main nearby rivers flowing into it, the Rideau and Gatineau Rivers. In winter, though, when food is scarce in the small portions that remain ice-free, gulls hang out at our stinky garbage dumps where they stay alive feeding on humans’ “Fresh Garbage”, a popular 1960s rock song by the band “Spirit” based on the garbage that “you didn’t quite consume”.

Back to birds, Northern Cardinals sing all year. White-breasted and Red-breasted Nuthatches are better known as “ass-up” birds. Downy, Hairy, and the huge Pileated Woodpeckers drill holes to forage and nest. Black-capped Chickadees, American Goldfinches, Blue Jays (feeder bullies), and the wise American Crows and Common Ravens are also here all year-round, as are Mallard ducks. Let’s not forget the American Robin, which loves lawns.

The late-breeding frogs have finished singing. These are the Green Frog, Bullfrog, and one I failed to mention last time — the Mink Frog. Their eggs have hatched and the tadpoles are not in a big rush to develop because they can overwinter for 1-3 years before transforming into froglets, unlike the early-breeding species that are in a big rush to transform before their shallow ponds dry up. Nevertheless the late-breeders would do well to grow quickly to avoid being eaten by fish, which the early-breeders don’t need to worry about. Remember the discussion of “strategies” last time?

Next time we’ll talk about the birds of September and what I think may have been a cause of our infamous sink-holes on Rideau St. Hint: You can find the answer on at least one informative plaque in the nearby Byward Market. 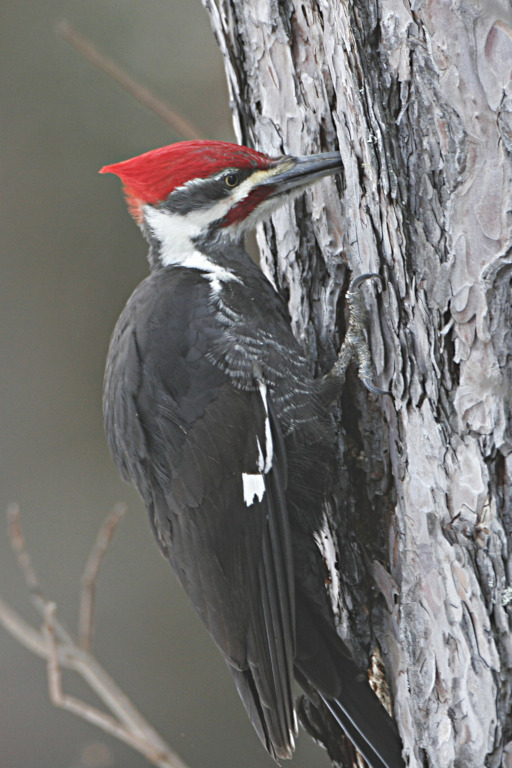 Photo Caption: The Pileated woodpecker is a favourite for many folks because of its large size and its resemblance to the possibly extinct Ivory-billed Woodpecker of “Woody Woodpecker”  fame. Pileated woodpeckers can be found in back yards and wooded areas all across Ottawa. Photo by Larry Master.

—Robert Alvo is a Conservation Biologist and Author of Being a Bird in North America, an image-intensive hardcover book available nationally at Chapters and a number of other stores in Ottawa: http://www.babina.ca .