September 27, 2018: Prairie Poet in the Spotlight;
Joni Mitchell tribute at the Gladstone (on October 17th to 27th).

Hot on the heels of the smash-hit tribute to Leonard Cohen, Bear & Co. returns to pay joyous homage to another Canadian giant. “This Flight Tonight: Songs of Joni Mitchell”, plays at The Gladstone theatre from Wednesday October 17 (preview) through Saturday October 27.

“We are over the moon to have the opportunity to showcase Joni Mitchell’s gorgeous music and incredible poetry,” says core Bear artist, and Kitchissippian, Rachel Eugster, one of the show’s creators.

Once again, Eugster will join Pierre Brault, Robin Guy, and Scott Richardson in a production directed by Eleanor Crowder. Just as they did in last fall’s No Way to Say Goodbye: Songs of Leonard Cohen, the quartet of singers will pass a range of instruments from hand to hand, including guitar, piano, bass, mandolin, banjo, harmonica, flute, accordion, and a variety of percussion instruments.

“With Joni Mitchell, there is always the painter’s hand in the music,” says director Crowder. “Expanding the musical palette we used for our Cohen show allows us to play with even more aural colours, much as Mitchell has done not only in her songs, but also on her canvasses.”

Using men’s voices as well as women’s furthers this. One question embedded deep in Mitchell’s work is how to live in a world that doesn’t support independent feminists. But unless men are included in the conversation, society will never grope its way to an answer. Furthermore, having a full vocal range, from Cohen-esque depths to a Mitchell-esque heights, in a line-up of solos, duets, and ensemble pieces allows the team to celebrate the songs with a wide range of vocal colours and shades, creating a “rainbow on the wall” of Mitchell’s major hits and hidden gems. Thus, the company will invite you to skate away with them for this spellbinding tribute to the soaring vocals, incisive vision, humour, wit, and bracing singularity of this uncompromising artist.

And again this year, Bear is inviting local choirs to get involved, offering them discount tickets and asking them to rise in their seats to sing along to the choruses of a couple of the songs. They will also be invited to advertise an upcoming concert on a choir board in the lobby. Bear was thrilled by the number of choirs who chose to join in the Cohen tribute last year, and is hoping even more choirs will participate this time. Email bearandcompanytheatre@gmail.com for more information.

Don’t miss the chance to help honour the Canadian genius whom Rolling Stone hails as “one of the greatest poets in 20th-century music—a visionary talent of achingly candid lyrics, fleet guitar lines and stirringly elegant vocals.” Gaze up with us at the Prairie sky as Joni Mitchell’s blaze of creative brilliance warms your heart.

The Gladstone Theatre is at 910 Gladstone Avenue. Tickets (with discounts for seniors, students, artists, and the unwaged) are available at http://www.thegladstone.ca/this-flight-tonight-songs-of-joni-mitchell/ , or through the box office at 613-233-4523 . For more information about Bear & Co., please visit http://www.bearandcompany.ca/ . 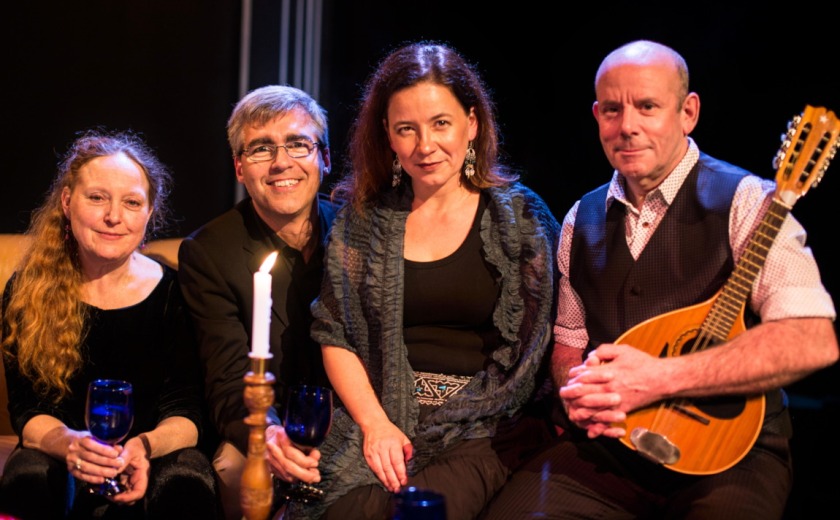